Game Of Thrones other tvshow

What happens when you ask Siri if Jon Snow is dead?

Some questions are so deeply concealed in mystery that not even Siri has the answers.

Take Jon Snow, for instance. Despite the huge number of clues and hints we’ve had over the last 10 months,and no one – aside from George R.R. Martin, the Game of Thrones cast, and maybe those who saw the show’s sixth season premiere Sunday night — knows for sure what’s going on.

Siri has clearly become so numb to the question that — it’s even started cracking jokes.

It was the first attempt let’s try again shall we ?… 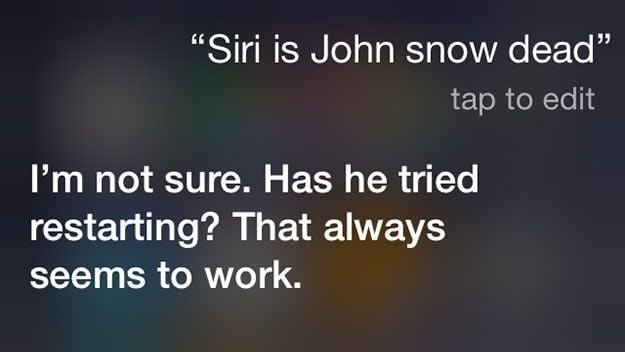 Is my voice breaking…?