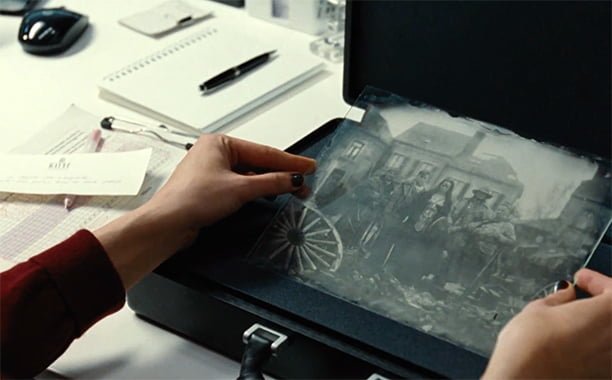 The opening scene of the trailer show’s present day, with Gal Gadot as Diana at the Louvre, doing some research into her own history. In the background beside her left hand is a blurry strip of paper – a note, whose writing can’t be deciphered, although the Wayne Financial logo at the top is unmistakable. Batman has given her a present this then obviously is happening after Batman v Superman: Dawn of Justice.

The movie then flashes back more than 100 years, with Diana standing on a cliff overlooking the sea surrounding her mystical island of Themyscira. She’s watching a streak of smoke cut across the sky and then skip across the waves. Ahh… the classic intro for U.S. Intelligence officer Steve Trevor

According to comics in Wonder Woman’s origin story, she agrees to leave the island to join Trevor and fight for the forces of good in the world, hoping to protect her island and its Amazons from the growing threat of the mechanized world beyond. Here, however, it doesn’t appear that Diana has permission to leave, yet….

Her bracelets, the glowing, golden Lasso of Truth

That’s one way to interrogate. But chances are, he’s done talking — one way or another.

In the comics, she developed the power to soar on wind currents, ostensibly zooming through the air like Superman, but it’s difficult to tell if that’s what is happening here.

Fans of the comics know that lightning is a power that can be called down by the sorcerer Circe, another longtime villain from the series.

The Golden architecture of Themyscira Island.