We finally have our first proper glimpse of Stranger Things Season 2, and that can only mean one thing — it’s time to Nerd-Up! and get some close-up, obsessive analysis frame by frame.

The teaser may only be of brief 36 seconds in length, but it’s still brimming with clues as to what we can expect from the show’s second season. 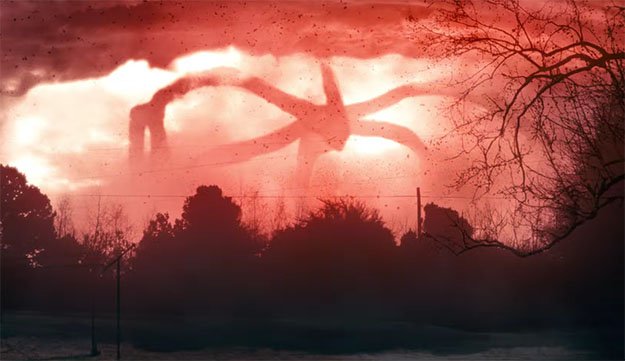 The ominous-looking, spidery thingy that pops up twice during the teaser may well be the next Season’s biggest threat.

But at the end of Stranger Things Season 1, some people theorized that the Thessalhydra — the monster defeated by the boys when they play Dungeons & Dragons in the “One Month Later” scene in the show’s final episode — would be in Season 2.

Which may still happen, but the monster pictured above doesn’t look much like a Thessalhydra.

As Will Byers was pretty good at drawing ( as we know from season 1 ), The above picture may belong to him. What does it mean? The last scene of the teaser was either of dream or a vision, similar to what Will experienced in the bathroom at the end of Season 1. He’s sketching the images he sees in an attempt to make sense of them.

The Stranger Things official Twitter account responded to quite a few people after the teaser aired on Sunday, and one of the recurring quotes used was “A storm is coming”.

I’m way into whatever the hell this thing is. #StrangerThingsSeason2 pic.twitter.com/7HcPvO2IXi

From the looks of it, Will — accompanied by his mother — is undergoing some sort of neurological test. Maybe he’s getting treatment for his ongoing visions?

Hey — wouldn’t Halloween be the perfect date for evil to break through into the town?

The world is turning upside down on Halloween.
Season two of Stranger Things will make its debut on Netflix on the spooky holiday.