SPOILER WARNING – The following article contains major spoilers for Batman v Superman : Dawn of Justice, it is best if you go and see the movie first in case you haven’t.If you have then go ahead.

The DC Cinematic Universe(or The DC Extended Universe) has finally begun to take shape. It’s been a few weeks since Batman v Superman: Dawn of Justice has hit theaters, and in addition to having a showdown between The Knight of Gotham City and The Son of Krypton, it also lays the groundwork for the entire DCEU. Certainly one of the most significant( and rather confusing) moments in this regard is the cameo by a time traveling(and heavily armoured) Barry Allen a.k.a. The Flash (played by Ezra Miller). 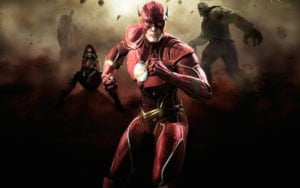 The Flash travels back in time to warn Bruce Wayne about the threat (based on the scene) posed by Superman. In the process, it also seems to set up the possibility of an alternative universe, an universe in which a DCEU version of Injustice: Gods Among Us is being followed.

Bruce Wayne falls asleep while decrypting a file on Lex Luthor’s Lex OS(Meta-Human Files). In the dream Bruce Wayne climbs a desert dune and sees the ruins of a city (I’m not sure which city is being talked about but most probably it is Metropolis). While up on the dune we see “The Omega” symbol on the ground,which is the calling card of none other than Darkseid.

He then goes to a truck which was supposed to carry Kryptonite (for stopping Superman),but as he enters he realizes that this all is a decoy and he has been ambushed by the secret police force of Superman (The symbol of the House of ‘El on their shoulders is seen very clearly). Batman then Proceeds to fight them (killing a few of them in the process)until he is surrounded by Parademons (Darkseid’s loyal henchmen).

They carry him and some of his accomplices away, Batman then wakes up in some sort of an underground bunker and sees himself and the others chained up hanging by their arms. Enters Superman, he instantly uses his heat vision(laser vision in the movies) to kill four of his men,then Superman turns to Batman and says :

“She was the most important to me and you took her from me.”

Superman then continues to punch through Batman and kills him.At this moment Bruce Wayne wakes up and sees the Speedster screaming at him – having traveled through time to warn him of something. It’s somewhat difficult to make out what Barry Allen screams at Bruce Wayne when he shows up in the dream, but it goes something like this:

The warning is Barry Allen seemingly pleading with Batman to find Lois Lane, unite the seven members of the Justice League, and be wary of some tragedy that might happen with the Man of Steel(or Lois Lane) at some point in the future.

In the Injustice storyline, The Joker tricks Superman into killing Lois Lane, which causes the Man of Steel to snap and kill the Clown Prince of Crime(In the DCCU we can expect Darkseid to control Superman and force him to kill Lois Lane). Following this grisly murder, Superman becomes a monarch ruler, unafraid to use lethal force to achieve his goals. Batman forms a resistance movement to stand up to the Kryptonian, but is ultimately outmatched against his former ally. There are numerous references during Bruce’s nightmare that point to this storyline, from the Superman-themed secret police, to Clark punching Bruce through the chest (In the same way he killed Joker), and Darkseid’d symbol and his parademons appearing to stop Batman.

Although The Flash actually joins Superman in the original Injustice storyline, the DCCU version of this plot could see Batman sending him back in time to try and get a headstart on this monarch regime.

Now,why does Bruce remember(or sees) things from an alternate universe?
It is because when Flash travels either way in time it creates a ripple in the timeline which causes him and the people around him to recall memories from other realities.
And since Flash has traveled back in time to warn Bruce about Superman,and to convince him to unite the seven members of The Justice League ,the Injustice Timeline may never happen in The DCCU(because he has stopped the events leading to the storyline). Thus paving the path for the formation of Justice League.

What did you think of Barry Allen’s cameo in Dawn of Justice? Do you think the DCEU is going to do the Injustice storyline, or are they pulling from a different plotline in the comics? Let us know what you think in the comments!

I talk about superheroes a lot,sometimes i get appreciated for it.