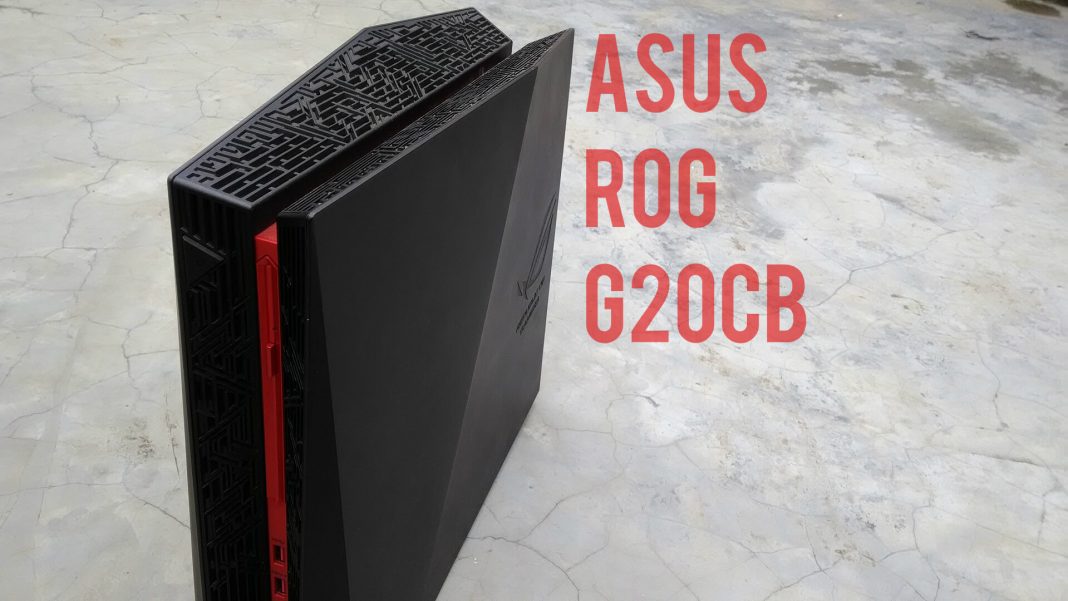 Those who want serious power for gaming and choose a laptop usually do so because they are compact and easier to buy than a full-sized desktop tower PC. But slowly the era of the huge tower PCs is fading and companies are making smaller and compact high-end gaming machines. That’s also part of what makes consoles so popular. However, gamers lose out on the flexibility, upgrade-ability, and sheer power of a gaming desktop.

Asus is trying to bridge these worlds with the new ROG G20CB, a relatively compact desktop with absurd amounts of power.

The first thing you’ll notice about it is the tribal pattern on the front and top, which look like air intake but is not. It’s all plastic and serves the dual purposes of looks and reducing acoustic noise. There’s RGB LED lighting which shines through when the unit is switched on. The ROG G20CB is sure to be noticed no matter how or where you place it.

The main body looks like it’s made of two identical halves, with a red spine down the center of the front joining them together. You’ll notice that light is cast out from the base of the ROG G20CB, through hidden cutouts matching the pattern on the front. There are three independent lighting zones in all, which can be controlled with Asus’s bundled software -‘Aegis’. 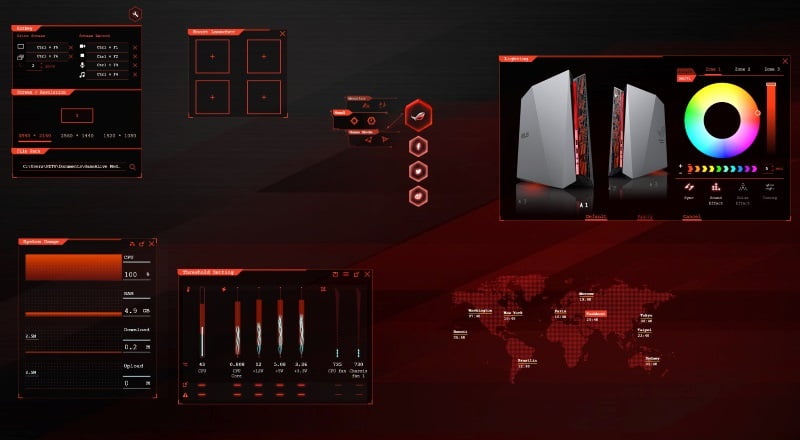 At the front, you’ll find the laptop-style pop-out optical drive, two USB 3.0 ports, and independent 3.5mm mic and headphones sockets. The power button is integrated into the design on the inside left. 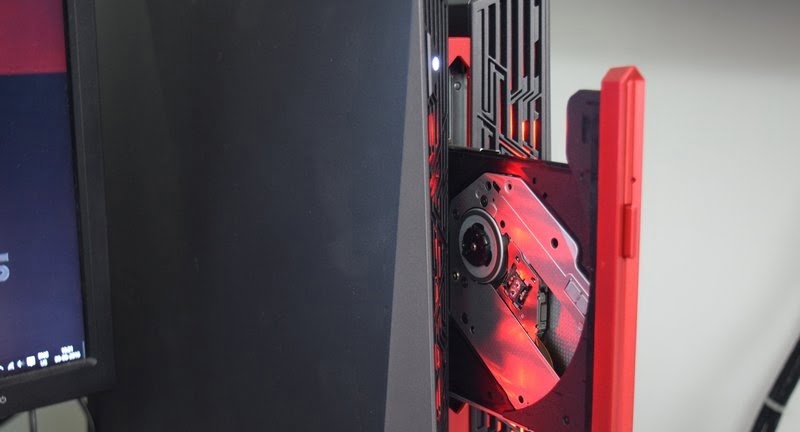 The back of the unit has all the ports – 2x USB 3.1 ports, Two USB 3.0 ports, 2X USB 2.0 ports (all Type-A only), Gigabit Ethernet, six 3.5mm audio sockets, and an HDMI port (Mother-Board) and two HDMI for VR/Gaming (GTX 1080 GPU) You can tether the G20CB to prevent theft thanks to the Kensington lock slot. We would have liked to have seen USB Type-C and S/ PDIF audio ports.

The ROG G20CB has two separate DC power inlets right next to each other, and two separate external power bricks. One of the power bricks supplies 230W and another supplies 180W, which just happens to be exactly as much as the graphics card requires on its own. 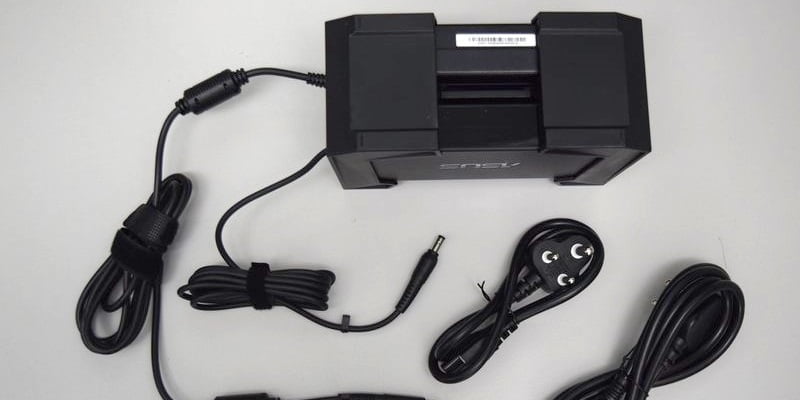 Asus bundles a keyboard and mouse with this PC. The keyboard is most notable for its red backlighting (non-customizable) and pseudo-mechanical look, but it’s actually quite mediocre.  There’s also a rotary volume control on the right side of the keyboard. The mouse is extremely basic, no RGB or Programmable keys.

There’s a desktop-class Intel Core i7-6700 CPU with has four of its cores running at up to 4GHz depending on the workload at hand, plus Hyper-Threading support. 32GB of 2133MHz DDR4 RAM. For storage, you get a 256GB PCIe SSD as well as a 3TB hard drive.

Setting up the ROG G20CB wasn’t much of a problem, except for the weird power brick situation (One of the cable was shorter than the other).  It boots up quickly and users don’t really need to do anything other than the initial Windows 10 personalization.

The PC itself runs silently even when under heavy loads. Interestingly, the weird body design doesn’t just serves aesthetics purpose but also reduce the noise from fans.

We ran a variety of other tests targeting overall performance as well as specific subsystems. PCMARK 8’s creative test, and it scored 6049. Cinebench R15 showed 137fps in its OpenGL graphics test and 786cb points in its CPU-bound test. 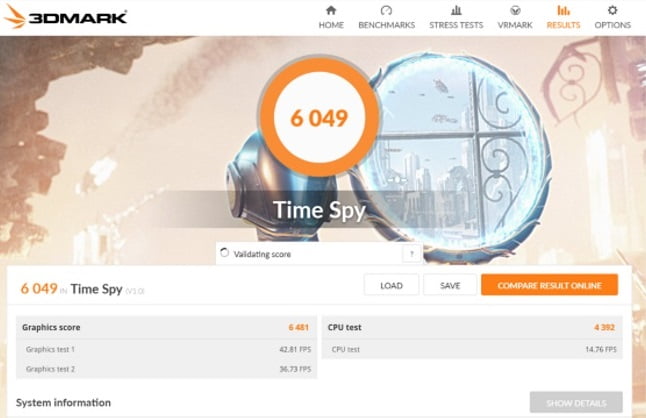 We ran multiple games in 4k on Ultra settings and most of them ran smoothly wth average of 53 – 60 fps. 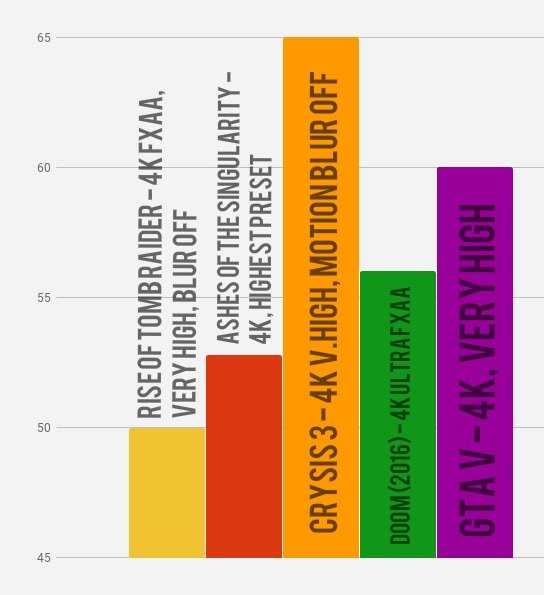 The idea of a compact, stylish desktop aimed at gamers is definitely great. However, the overall package still didn’t come out perfectly baked, in our opinion. This is clear in the ridiculous dual-power-supply arrangement, the weird RGB control software, and the mismatched keyboard and mouse. Performance is fantastic.

On the other hand, it really isn’t that compact all things considered, and it won’t replace your living-room gaming console. Plus, bear in mind that anything less than a 4K monitor is a waste of this hardware’s potential – and they also are not cheap. 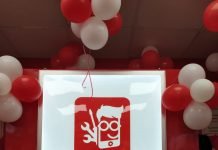 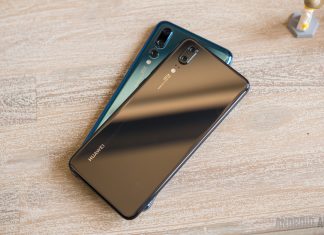 Agrim - March 28, 2018
0
Huawei P20 and P20 Pro have been launched in France on Tuesday. Both smartphones will be available to customers in Graphite Black, Midnight Blue,...

Here’s What Niantic Has In Mind For Pokemon Near By Locator...

Mysterio Could Be Skrull in Spider-Man: Far From Home