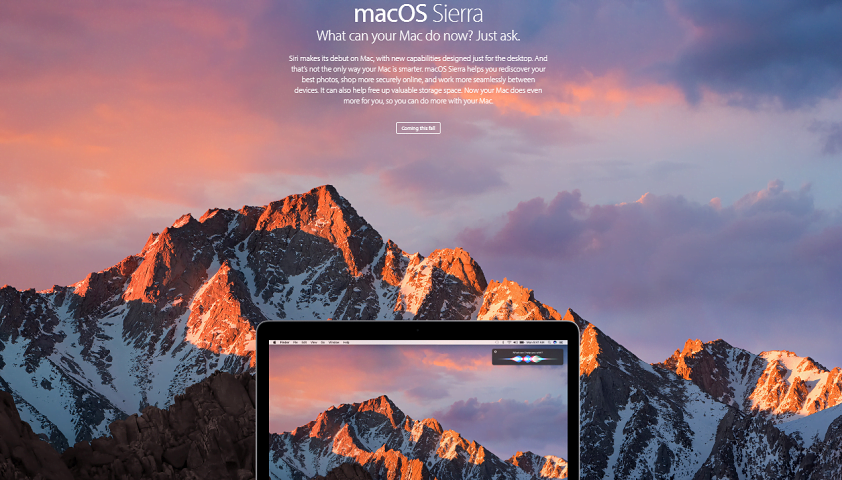 Apple has announced big changes coming to OS X in the fall. Starting from the name, which is now macOS Sierra. Apple has got rid of a fifteen year long legacy of the name “OS X.”

macOS Sierra is not rebuilt like the iOS, but has been positively progressed.

Here are some highlights:

Siri is now debuting to macOS. And in a big way. Siri can help you multitask better than on an iDevice. She stays in the dock and the menu bar. One click away lies document search, messaging assistance and a lot more. Of course, she does all that the new Siri does on iOS and much more as well. She will now keep learning new things because she is now open to developers. The next big overhaul, and something that personally gets me pumping is the new storage system on macOS Sierra. Apple calls it “Optimized Storage”, it finds old and useless files intelligently and beautifully helps to make room. It also has absorbed third party functionality such as deleting obsolete updates and duplicate files, things that required applications like Onyx and MacGemini earlier. Tabs, we’ve been observing these majorly ever since Chrome introduced them. But Apple took it a step further in the last update and brought it to Finder. Well now its taking a bigger step to all applications on the running on the Mac, including Maps, Pages, Preview and many more.

macOS Sierra is aimed at improving the multitasking experience for the power users who use Macs. Keeping that in mind, they have now introduced Picture-in-Picture that helps creative individuals, and the multitasking users, to watch videos in a small draggable window across the OS.

Talking about multitaskers and power users, Universal Clipboard is a feature that the current generation too, might had been dreaming about. Apple is introducing a “Copy on one device. Paste on another.” style clipboard and it is fantastic! It’s a clipboard that syncs with your iOS and macOS device. For all those who own a Apple Watch, now you can unlock your mac as soon as you wake it up. And it is secure! Apple Pay, something that seems futuristic in a country like India, is developing in the fast lane. It has finally made its way to the web! Now when one is shopping online, the payment can be authorized through TouchID or the Apple Watch. iCloud Drive is also now better than it was earlier. It syncs not only the Document folder but the desktop as well and makes everything available across all the iDevices!

Lastly, if you’ve read our last post iOS 10 | Rebuilt from the Ground Up, you’d know this one, Photos, iTunes, and Messages gets overhauled. If you haven’t seen our last post, do have a look. (I know, because I wrote it)

If you haven’t owned a Mac before or plan to get one soon, it seems like the right time would be in the Fall, with the latest macOS shipment!